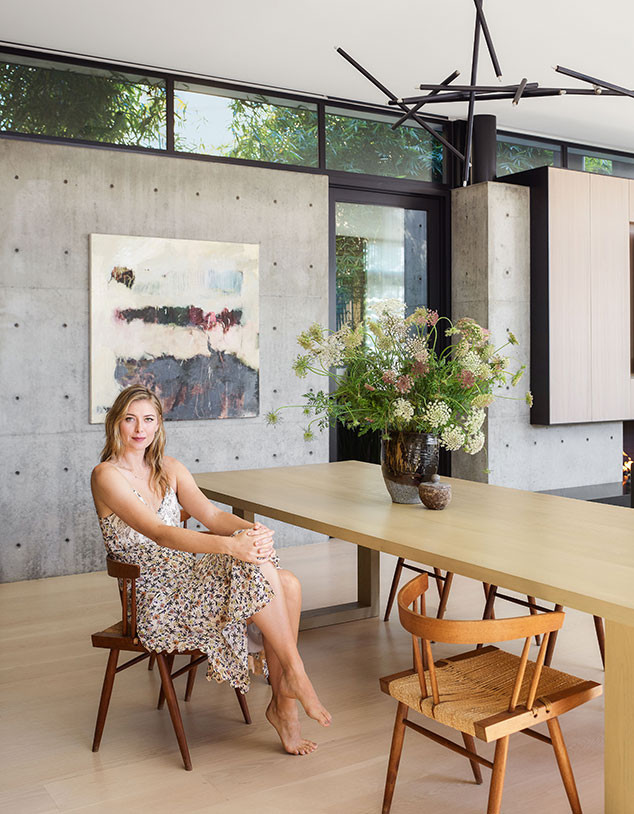 The walls may be concrete, but there’s nothing cold about Maria Sharapova‘s modern home.

The famed 32-year-old tennis player took Architectural Digest on a tour of her Los Angeles abode—and let’s just say we’re totally impressed. The athlete’s house is a serene mix of minimalism and modernity with Japanese inspirations and no shortage of artwork.

But, no matter the concrete, the rooms also feel cozy with seating in serene colors and textures. And, if there’s cause for celebration—or just a craving for rosé and sunshine —Sharapova’s living room leads to a picturesque backyard featuring a deck with a long table, grill and closable patio roof.

With a pool bordering the house, there’s little travel necessary if you fancy a dunk and if anyone need to dry off, they can do so on one of the nearby daybeds or take a seat close to the outdoor fireplace.

And, just when you thought what to expect around the corner of Sharapova’s seamless home, there’s a bowling alley (!). As she explained to Architectural Digest, the dimensions of the basement were long enough that it was a good fit.

“I’d say it is the most surprising aspect of this home because I’m not a bowler myself,” she acknowledged to AD.

While she’s not exactly a pro just yet, there’s a standing invite for any others.

As Sharapova said, “They told me that it’s like a professional alley, so that if there are any pros that want to come and bowl at my house, you know where to find me.”

Check out AD‘s house tour in the video above! We’re sure you’ll agree the home is a grand slam.

Would Leighton Meester Return for New Gossip Girl? They’ll Have to Ask Adam Brody… Spotted in a Los Angeles fast …