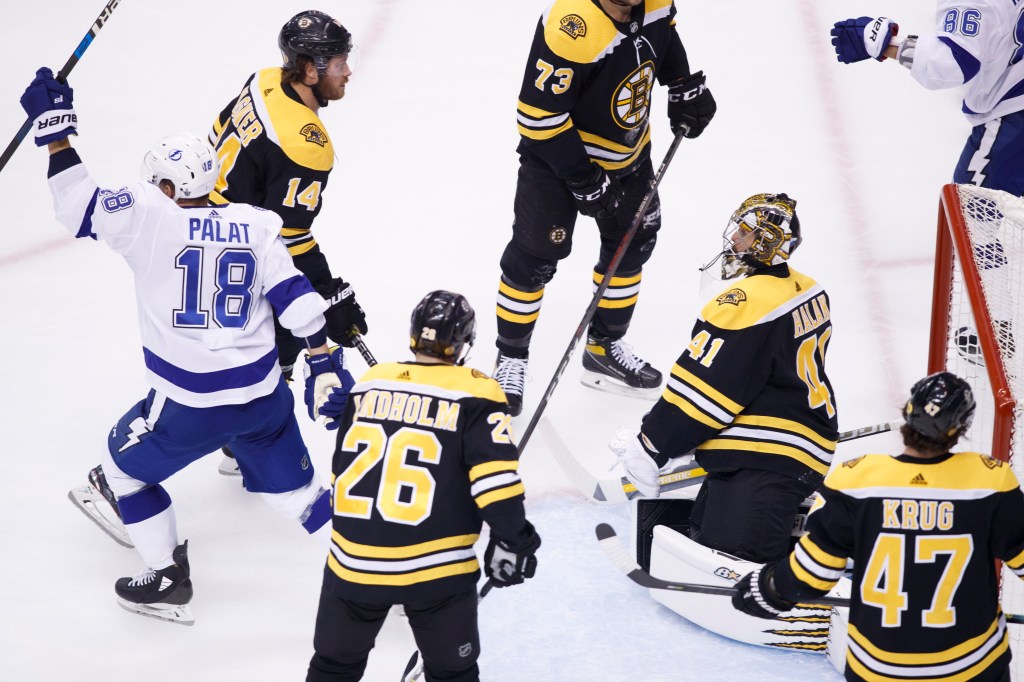 Whether you’ve taken the human, compassionate approach to his absence, or you remain unforgiving about it, one thing is becoming increasingly undeniable: The Bruins miss him.

When Rask left the Toronto bubble on the morning of Aug. 15 to attend to a family matter, just hours ahead of the Bruins’ Game 3 against the Carolina Hurricanes, the B’s chances of winning the Stanley Cup dimmed considerably.

Now, after the B’s lost 3-1 to the Tampa Bay Lightning in Saturday’s Game 4 to fall behind three games to one, those Cup chances are all but extinguished.

Jarolsav Halak is a battler, and the fact that the B’s are down to their last out is certainly not all his fault. But there was a juncture in Saturday’s game when the Bruins needed him to come up with a makable save and he didn’t.

The B’s were chasing the game after falling behind 1-0 in the first period on some uncharacteristically sleepy play from the fourth line, but they were making a strong push in the second period. They didn’t score on an early power-play to start the period, but they gained momentum from it and were testing Tampa goalie Andrei Vasilevskiy.

But on one of the few Tampa counterattacks in the second, the Bolts scored. Anthony Cirelli served up a long distance one-timer to Ondrej Palat at 12:29. Palat’s shot was a hard one, but not particularly well-placed. It was well within Halak’s glove hand, a trouble spot for the netminder throughout the playoffs, and he just missed it.

So instead of being one shot away from tying the game, they were in a 2-0 hole, with no ladder in sight.

“Well, it doesn’t help, obviously,” said coach Bruce Cassidy, frustrated for a number of reasons. “You’re in a one-goal game and feel you’ve played through some stuff. Again, tonight in the first period, our guy (Karson) Kuhlman gets drilled from behind, we confronted the situation (by Nick Ritchie) and we’re on the short end of the stick. And you saw what happened on a very similar hit later. So there’s a little bit of that going on in this series. We weren’t able to play through the other night (in the Game 3 blowout loss), and then tonight we did a much better job. So, yeah, we need that save. It’s a good hockey club. We’re not scoring a lot right now and part of that is our own issue about hitting the net but they’ve got a very good goaltender and a good defense. Every goal matters and that one, obviously, at the time was a big one for them.”

To be clear, Vasilevskiy did not have to steal this game for Tampa. He stopped 29 of 30 shots, with not a ton of testers in that bunch. And when the B’s were looking to make the late push with Halak pulled for the extra skater, the Lightning defenders refused to give the B’s a sniff. In truth, Halak had to come up with more high degree of difficulty stops than his counterpart. And requiring that he beat a team like Tampa 1-0 is an awfully big ask for the backup – a very good backup, to be sure, but a backup nonetheless.

But much like Rask in his long run last season, Vasilevskiy was good when he had to be. That juncture came in the second period when the B’s gave their push. The 6-foot-3, 215-pound Vasilevskiy held his ground on a couple of occasions when the B’s crashed the net, most notably when Karson Kuhlman took the puck to the net and then when a loose puck squirted out to Joakim Nordstrom, he made a terrific pad save.

That allowed the Bolts to gather themselves and deliver the killer strike from Palat that Halak could not stop. Tampa went up 3-0 late in the second on a bad bounce goal late in a five-minute major from the Ritchie hit. After that, it was about playing for their pride, and the Bruins certainly did a better job of that than they did in the 7-1 Game 3 loss. But Tampa is just too good to spot three goals and expect to come back. Now the B’s need to beat the Lightning three straight games if they want to advance.

The B’s goalie tandem that won the Jennings Trophy could have been very useful in this series. Rask could have played the first two games, and a fresh Halak could have given Rask a break in the second half of the back-to-back in Game 3. Instead, the 35-year-old Halak looked a tad gassed in Game 3, and the results were predictable.

Much like our current political climate, there is enough information for both sides of the Rask debate to stay entrenched in their thinking. The No. 1 goalie’s departure from the bubble gives his longtime and unrelenting critics another chance to say “See, he’s not there when they needed him.” Meanwhile, Rask’s supporters can smugly say “Miss him a little, don’t ya?”

With their once-impressive season hanging in the balance, the Bruins certainly do. But deep down we all knew that was going to be the case.

Music feeds soul of BSO conductor Nelson more than ever Andris Nelsons has a mantra: Music is food for our …