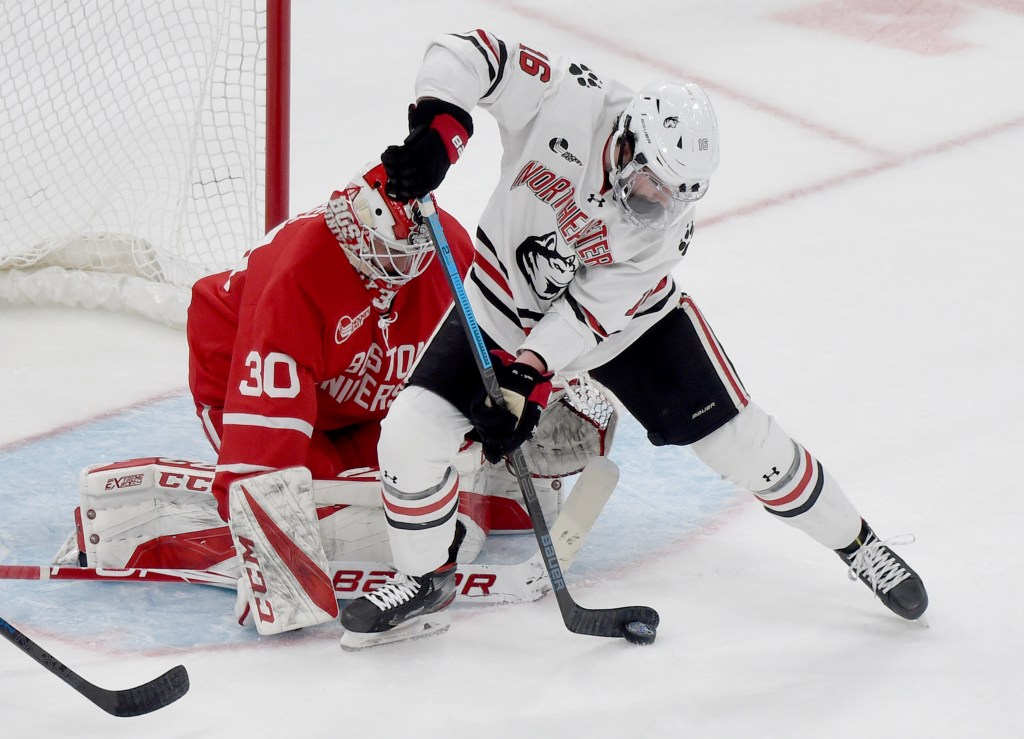 There were five minutes remaining in the middle period and moments after Northeastern had taken an improbable two-goal lead against crosstown rival Boston University when the NU band struck up the chords to the old Monkees refrain, “I’m a Believer.”

Along Huntington Avenue and the NU campus there are oodles of believers and eager well-wishers eager to jump aboard the Huskies’ ice train, which has now recorded a first-ever three-peat championship run in the tournament it once went 28 wintry years without winning.

Monday night’s pulsating 5-4 overtime triumph, coming with two top players sidelined, gave credence to the revitalization project that head coach Jim Madigan has brought to a program he has so ably served as a player, assistant, and now bench boss. The result came on a long shot by superb sophomore defenseman Jordan Harris from Haverhill, who ended the second-longest Beanpot championship game on record at 79 minutes, 33 seconds — only 19 seconds shy of the 79:53.6 that Boston College needed to beat Boston University in 2012.

“I thought it was a great hockey game,” said NU’s Madigan, who believes his last three contingents have separated themselves from the 90-year history of the hockey Huskies as a special group. “They pushed. We pushed. They pushed back. Both goalies, when (Sam) Tucker went in for them he settled them. Our guy (Craig Pantano) kept us in.”

The winning play came courtesy of an assist from referee Giuseppe Testa, whose penalty tripping call on BU senior right wing Patrick Harper at 13:18 of sudden-death was arguably a contributing factor to the deciding play.

“From a BU perspective, I’m sure they didn’t like the call, but we’ve been on that end of it, too,” said Madigan, referring to the 2015 ‘Pot Final that was won by BU, 4-3, over NU (15-8-3) on a goal by current Bruins skater Matt Grzelcyk, a loss that still causes the 57-year-old NU coach to grit his teeth.

BU (10-9-8) coach Albie O’Connell was not a happy camper when he arrived at the post-game news conference. Asked about the call, O’Connell replied, “What did you think? I’m not supposed to comment on the officials but the diving in the game that was called was unbelievable. Other than that I thought we played a terrific game pretty much start-to-finish.”

A dramatic goal by Trevor Zegras, his second of the night, at 19:58 of the third period allowed the Terriers to erase a 2-goal deficit and force overtime played in front of a tournament-record crowd of 17,850.

Neither club managed to score in the initial five minute overtime, making the game an official 4-4 tie for NCAA purposes.

Harris, a Montreal draft choice, finished the drama with his fourth goal, which came at 14:33 of sudden-death. Pantano skated off as the Eberly Award winner, emblematic of top tournament goaltender based on two-game save percentage. Pantano (40 saves) becomes the third straight NU goalie to win the award, joining Cayden Primeau, who won the past two years.

BU lifted Tucker (18 saves in 46:40), who had come on in relief with 1:32 and exerted relentless pressure around Pantano as the Huskies couldn’t clear the puck from their zone. Sophomore Jake Wise, who had opened the scoring for the Terriers nearly three hours earlier in the night, kept the puck alive. Zegras took possession, swung near the left of the crease and flicked a backhand home at 19:58 for his second goal of the game and knot the score.

“We just needed to get in the locker room after that first 5 minute overtime,” Madigan said.

BU (10-9-7), which had won the most titles (30) in tournament history, was chasing its first crown since 2015 and only its second (also 2009) this century. By contrast, NU (15-8-2) was eyeing a first-ever three-peat. NU, which owned six mugs, had captured four of them at the expense of the Terriers, who led all-time in championship matchups by a 9-4 margin

NU entered the contest banged up with stellar freshman defenseman Jason Struble, a Montreal draft pick, sidelined for the year with a lower body injury while hard-rock wing Matt Filipe, of Lynnfield, whose professional rights are owned by Carolina, was listed day-to-day with a shoulder issue. The absences show as the Huskies were slow to move the puck from its zone in the early going and the talented and speedy Terriers took advantage.

Sophomore left wing Matthew Quercia sent a pass to the goalmouth where center Wise, of Reading, shoveled the puck in behind Pantano, a transfer from Merrimack. The goal, coming at the 2:49 mark of the first period, represented just the second in 38 career games for Wise, a Chicago draft choice, with both of his tallies coming a month apart dating to a 3-2 win Merrimack on Jan. 17.

The gap suddenly widened as NU star center Tyler madden sat in the penalty box for a boarding minor whistled at 6:24. Zegras took control of the puck and drifted along the left boards before unleashing a low wrist shot that beat Pantano at 7:50. Anaheim scouts are certainly smiling over Zegras’ ninth goal in 26 games.

NU’s best bid came at 16:45 when right wing Matt Thomson of Reading batted down a shot and the whacked a backhand that BU newcomer Ashton Abel blocked with the left pad with Thomson sprawled in the crease after being knocked off his pins.

NU, which trailed the series all-time by a lopsided 166-63-10, was desperate for a break to claw back into the game and received from its top ace Tyler Madden. The sophomore sniper fired a wrist shot into the back of the net from the left circle at 2:53 of the second period It was the 18th goal of the season for the future Vancouver Canucks (third round) skater.

The goal revved up the Huskies, who began to storm the crease area around Abel. NU tied it, 2-2, at the 5:51 mark when freshman left wing Aidan McDonough snapped a 25-foot shot past Abel for his 10th goal. McDonough, who accounted for one of Madigan’s longest recruiting trips a couple of blocks away in Milton, could someday spend time on the same Vancouver line with Madden.

With NU storming the palace, the Terriers found themselves in penalty trouble as defensemen Cam Crotty and Alex Vlasic both incurred minors. During the 5-on-3, junior center Zack Solow continued his sizzling play by drilling a 6-on-3 shot into the net at 9:42. It gave Solow tallies in each of his last four games and 13 in all for the season.

The deluge wasn’t finished as NU doubled its margin with a fourth straight goal as senior right wing Jozefek found the mark with  11:23 with senior transfer Brendan van Riemsdyk providing a screen in front for the forward’s seventh goal as Husky partisans went bonkers.

O’Connell made a goaltender switch at that point, lifting Abel and inserting grad transfer Tucker, a former Yale player. Tucker came up big with consecutive stops on McDonough and Madden during a late flurry with BU shorthanded.

BU hung tough and closed with a power-play goal at 1:56 in the third. A point drive from junior defenseman David Farrance, who leads all defensemen in the country in goals, registered lucky No. 13.